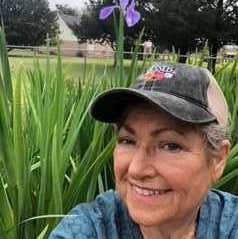 Cindy’s interest in irises began over 20 years ago when she put a water feature in the backyard of her newly purchased house and was looking for plants to fill it. 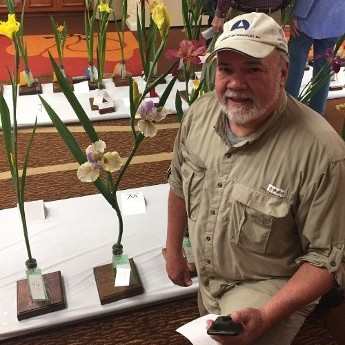 Keith resides outside of the town of Independence, La. It is still what most people would consider country and he has lots of space to grow and hybridize Louisiana irises. 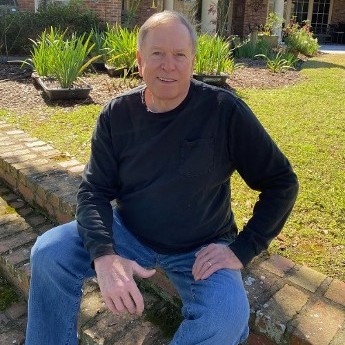 Ron has resided in Lafayette since 2004 after having lived in his native California for 30 years.  He had attended college in Lafayette and through a sister-in-law got to know Mr. Charles Arny. 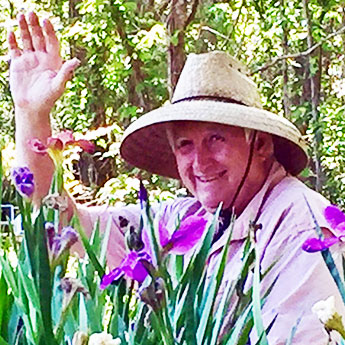 Joe Musacchia hails from about 60 miles south-east of New Orleans between Houma and Thibodaux. He is a Master Gardener, having completed the program with the LSU Ag Dept. 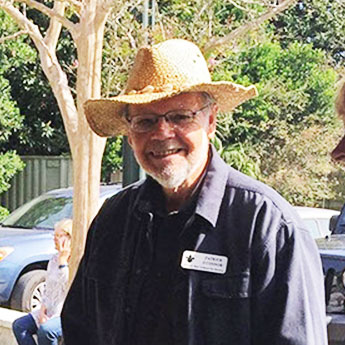 Patrick O’Connor resides in Metairie, LA, a close-in suburb of New Orleans, La. His interest in Louisiana irises began when he bought a house in Baton Rouge in the mid-1970s. 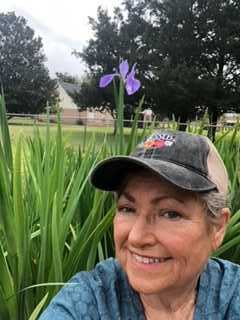 Cindy’s interest in irises began over 20 years ago when she put a water feature in the backyard of her newly purchased house and was looking for plants to fill it. She found that her plants, including irises, lotuses, and water lilies, multiplied quickly – and she started giving them away to friends and neighbors.

As she learned more about growing irises, she discovered the huge variety of forms, colors, and shapes — and she was hooked. She also met Patrick O’Connor who encouraged her to expand her knowledge and learn more about species iris as well.

Further encouragement came from an unusual source: as she applied for a license to ship irises across state lines, the Mississippi Ag Inspector complemented her outfit, saying “Your iris look better than many I’ve seen in commercial nurseries.”

Cindy muses “for me, spring is like Christmas” seeing all the Louisiana Iris flower scapes emerge. “The first color in the bud is so dreamy, and seeing swathes of blooms together is magical.”
Her first introduced hybrid was Pearl River Princess, which is a good grower and remains quite popular.

Now, as she charts a new course after selling her nursery, Cindy is turning her focus to hybridizing and to helping preserve endangered wild iris in Louisiana.

Keith resides outside of the town of Independence, La. It is still what most people would consider country and he has lots of space to grow and hybridize Louisiana irises.

He is a licensed Landscape Contractor at present and has hybridized Azaleas, Daylilies, Rose Mallow, Lobelia Figs, as well as Louisiana Irises.

Keith started collecting plants at a young age. His mother and both grandmothers were avid plant lovers. He said he was always in the woods and along creeks or rivers and saw a wide range of plants that you typically don’t see in local nurseries. Whenever he saw something of interest, he would bring a few home. One collected plant was an iris Fulva, and that got him started growing the Louisiana natives. He began hybridizing about 12 years ago. His first goal was just to reproduce native species which he had collected by cross pollinating them to like species. This goal was adjusted some when he saw his first Louisiana Iris Hybrids. He bought some named Louisianas and started crossing a few. His first two Registered irises aren’t really where his heart is. His future introductions will probably be species crosses.

His goals in iris breeding are to produce plants that are unique and are good growers. He also hopes to have some improved species irises, by using the best collected specimens to produce better characteristics.

We welcome Keith onboard and look forward to his future Introductions.

Ron has resided in Lafayette since 2004 after having lived in his native California for 30 years. He had attended college in Lafayette and through a sister-in-law got to know Mr. Charles Arny. It was not until seeing an article in Southern Accents magazine in 1988 highlighting the Louisiana irises in Arny’s neighbor Dick Goula’s yard,that the irises made a real impression. He ordered about 8 irises from Bois D’Arc Gardens and during the following bloom season decided he wanted to come up with some irises of his own. The first seedling that he felt worthy, Honey Galore (HM 2004), was introduced by Dorman Haymon, his mothers-in-law’s hairdresser, in 2000. Ron feels lucky to have been around Mr. Arny and Dorman and while living in California, Joe Ghio. They all helped increase his interest in Louisiana irises.

Ron generally does not have a specific goal in mind when making crosses other than trying for a plant with decent vigor, unique flowers and stalks having 4 or more positions with nice bud placement and at least some double budding. Ron has had 9 irises introduced and a new one coming named after his grandmother, Rose E. Chadband. He already has one named for his mother, Jean Betzer. He hopes to accomplish a trifecta – he has his wife’s name, Eugenie, reserved but has yet to come up with something he and she agree is “the ONE”.

Ron’s Dark Dude won both a MSD and the Charles Arny SLI Popularity Poll in 2019. Another introduction, Rooster, won an AM the same year.

We wish Ron much success in Hybridizing new and better Louisianas in the years ahead.

Joe Musacchia hails from about 60 miles south-east of New Orleans between Houma and Thibodaux. He is a Master Gardener, having completed the program with the LSU Ag Dept. His love of Louisiana Iris started when he began looking for a garden plant that could handle the growing conditions where he lived, such as hot summers, wet cold winters, late freezes, and frequent flooding. His first encounter with them was in 1997 at Bois d Arc Gardens in Shriever, La., and he knew he found what he was looking for.

Joe began hybridizing in 1999, after watching the process of Dorman Haymon and Patrick O’Connor. His first registered and introduced iris was “Pure Water”, which was sent to Japan and New York for the Pacific Flora Exposition.
His goal is to produce a Louisiana iris with ruffles that have good bud placement and will open well in our damp climate. His hope is to produce a nice ruffled red specimen.

Patrick O’Connor resides in Metairie, LA, a close-in suburb of New Orleans, La.
His interest in Louisiana irises began when he bought a house in Baton Rouge in the mid-1970s. A previous owner had an interest in native plants and had grown I. fulva, one of the Louisiana iris species. Being unfamiliar with red, or wild native irises, he started reading and found a Southern Living article on Louisiana iris that had contact information for Dick Goula and Charles Arny. He visited Dick while in Lafayette about that time, joined SLI and began reading old publications on the irises. In one, he found a reference to Frank Chowning, a Little Rock hybridizer. Little Rock was his original home, and he contacted him on a visit and for a number of years visited him on every trip home. Frank Chowning was a sort of mentor, and he gave him plants to use in a hybridizing program. From there it developed into a lifelong hobby
He made his first crosses in the mid to late 1970s. Those were not successful, so he planted seeds from some bee crosses. Several turned out to be nice, including ‘Feliciana Hills’.

His first registration was ‘Spanish Town’, which has been lost over time. Since the beginning, Patrick has registered about 120 irises.

His first goal is to develop good garden irises. His goal is not refining some particular attribute, but on developing irises that do well in the garden and have good qualities such as good stalks and floriferousness. He likes the multiple forms found in Louisiana irises, including the full, modern irises popular today, but also the flaring, open forms reminiscent of the species that are the heritage of the Hybrids. He said it makes him happy each season to see a new distinctive iris bloom that would make a good candidate for registration and introduction.

Many of his irises have won awards. ‘Deja Voodoo’ won the DeBaillon Medal in 2018. ‘When Pigs Fly’ received the Charles Arny Award in 2019 as the winner of the SLI Popularity Poll. His irises have won the Caillet Cup several times, which is an award voted by those on convention tours. Patrick said gardeners should recognize that there are far more excellent irises on the market than the few that win awards, and like the irises of all hybridizers, a larger number of worthy ones have not been sufficiently noticed.